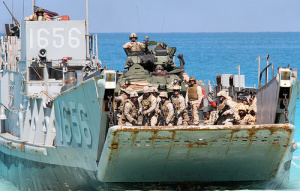 In 2003 we invaded Iraq with the hope that people would cheer in the streets. They didn’t. We occupied the country anyways and our presences was and generally is hated by the people.

Starting with the protests on National Police Day, January 25th, 2011, the Egyptian people went to the streets, largely peacefully, and removed Mubarak from power. Now the Egyptian military, hesitant, will have to get involved in running the country. But how many of Egypt’s last leaders have come from the military? Nasser, Sadat, Mubarak, …

We already are conducting military exercises with the Egyptian military and have ties. Now is the time to strengthen them, to increase the scope of exercises, to do anything we can to turn the Army’s attention from running a state, and force the people to run the state and create a popular constitution.

What about constitutional design? For a country with a good economic outlook and relatively low ethnic diversity, a consensus democracy with weak executive and decentralization increases the changes of democratic durability. 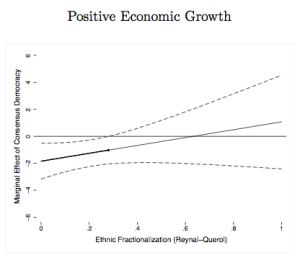 Back in 2006 I did some work that provides empirical support for this claim.  The figure on the right, taken from the paper, shows the marginal effect of having a consensus style democracy on the chances of regime change, when there is positive economic growth. Egypt places at about a 0.19 on ethnic fractionalization and has experienced positive growth in the past few years. Therefore a consensus style democracy would have a negative marginal effect on the chances of regime change. In other words, a consensus democracy in Egypt would survive longer than another integrative democracy.